Home › Uncategorized › How Dr. No Killed The DVD–And The World As I Know It

How Dr. No Killed The DVD–And The World As I Know It

The other day I went around to the local Rogers outlet to pick over the remains.

Rogers has ceased its DVD rental business (the company says it’s losing money), and what with Blockbuster having closed up shop several months ago, I can no longer rent a disc, take it home, insert it into a machine and watch it on my television. That’s pretty much finished.

The end of an era with few tears and virtually no comment.

At Rogers, I ran into an old friend from the days when I was writing about film. He had publicized movies for one of the big studios. Nowadays, he works for a small DVD distribution company.

That stands to reason. If Blockbuster and Rogers and the other North American rental giants who weekly gobbled up hundreds of thousands of copies of the latest movies, are out of business, then how can the DVD disc itself long survive? According to my pal in DVD distribution, Wal-Mart, another major player in all this, is cutting back on the movies it sells.

All of which is to say in the near future you won’t be needing that DVD player you’ve got tucked under your TV set.

If you want to watch a movie, you will have to download it via the Internet. I’ve already started to do this. We recently bought a Blu-ray player which also allows us to stream movies. To me, the quality is not as good as Blu-ray discs (for the moment at least  you can’t stream the fifty or so gigabytes that make up the dual storage on the average Blu-ray disc), but no one seems to care.The twenty-first century, I suppose, has arrived in our household.

Back in the late 1970s, I can still recall the initial heady excitement of actually being able to rent a movie that you could watch in the comfort of your own home. Who could believe it? Hollywood in your living room.

What’s more, I soon discovered, you could actually buy movies on tape and watch them any time you wanted. I still remember getting a friend going to New York to buy me a copy of The Godfather. When I got it, I thought I’d died and gone to, well, if not heaven, certainly a nice place where you could watch your favorite movies whenever you wanted.

Growing up, part of the reason movies were so magical was their lack of availability. The only place where you could see a movie was in a movie theatre. In the small town where I lived, the bill at the local Capitol theatre changed every three days or so.Many of the movies I was so desperate to see opened mid-week, and I wasn’t allowed to go to the movies except on the weekend.

Much to my horror, Dr. No, the first James Bond movie, which I was dying to see, opened on a Tuesday. I had to plot and scheme and lie in order to get out to it (“Mom, I’ve got to go over to the library to research an assignment for school!”). Seeing movies generally was not so easy. You had to work at it, and even then they could remain elusive.

La Dolce Vita, the Federico Fellini film that caused such a stir at the time of its release, never did reach the Capitol. It remained stuck in my lurid imagination–Roman decadence! Anita Ekberg’s bosom! Italian temptresses writhing naked under fur! Just thinking about what it might contain started my youthful pulse racing.

You can imagine, then, my unending joy when I finally was able to buy my own copy of Dr. No. And yes, I now own a copy of La Dolce Vita, although, perhaps not surprisingly, it could never quite live up to the version I held in my imagination. 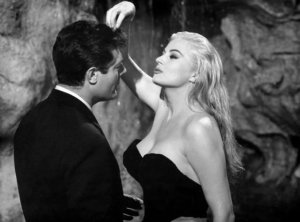 Today, movies are everywhere. Nothing is inaccessible. Heck, you can download them onto your smart phone. They have become disposable in a way they never were when I was a kid. The magic, while still there on occasion, is not what it used to be, but then neither are the movies.

So now they will be downloaded onto our home screens seemingly out of air, and they are in danger of becoming even less meaningful. My son Joel, the family technology guru, assures that in the not-too-distant future, everything will be available on-line, that nothing will be lost.

I hope Joel is right, but if I want to own a movie, it will have to be stored on a cloud. That is not the same, somehow, as being able to take a disc down off a shelf.

I’m probably exposing my naiveté by admitting how astonished I am about all this–how quickly we have evolved from the movie theatre to the VHS rental at little corner stores to DVD rentals at big box outlets run by huge companies to the disappearance of all that in favor of the Internet download.

Increasingly, it seems that we can only access the world through the Internet. I’m possibly becoming more paranoid as the shadows lengthen and more and more changes, but is it possible we are putting too many eggs into one basket?

How far off is the day when we will never leave the house? Whatever the shortcomings of a popular culture, one of the marvellous things about it is the shared experience it creates. Now that experience appears to be threatened with extinction.

Maybe everything began to change the day I rented that first VHS tape and took it home. Maybe I’m to blame for what has happened.

If only I hadn’t been so anxious to see Dr. No. That’s when it started. That’s when life as I know it began to change.

I left Rogers carrying the remains of the lost DVD rental era. I had found some Blu-ray movies I wanted for my collection. But I had the nagging sense as I departed my local video store for the last time, that I had lost a whole lot more.

2 comments on “How Dr. No Killed The DVD–And The World As I Know It”