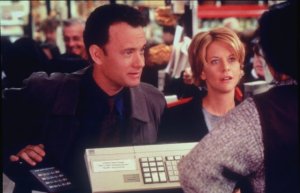 Last night my wife and I watched Nora Ephron’s You’ve Got Mail, and had a good cry.

Anyone who would dare in this jaded, gross-out comedy-obsessed age to throw Roy Orbison singing Johnny Mercer’s “Dream” and Harry Nilsson’s version of “Over The Rainbow” together in the same movie, along with a great dog and everyone speaking intelligently about everything from Jane Austen to the life lessons contained in The Godfather, is my kind of woman.

I never met Nora Ephron but I did see her once at Elaine’s, the Upper Eastside New York eatery where everyone who was anyone at the time hung out. She was with her then-boyfriend Carl Bernstein. I don’t think I even realized who she was until later. They sat alone together, somewhat awkward, Bernstein in the midst of his post-Watergate fame, and appearing uneasy about it.

Later (after she married and divorced Bernstein and wrote a novel, Heartburn, based on his infidelities), Ephron did something that I badly wanted to do–she moved with seeming ease from writing magazine pieces to writing movies, culminating in When Harry Met Sally, the best romantic comedy since the golden age of the genre in the 1940s and 1950s. It is a movie that hilariously argues men and women can’t be friends because sex keeps getting in the way–and boy did that get a few conversations started when it was released in 1989.

I was single then and for me the movie was a kind of tao of insights, albeit humorous ones, into adult male-female relationships, relationships which in my post-marriage life usually left me confused and shaking my head. I particularly liked Ephron’s take on the early stages of a relationship: “You take someone to the airport,” Billy Crystal says in the movie, “it’s clearly the beginning of a relationship.” 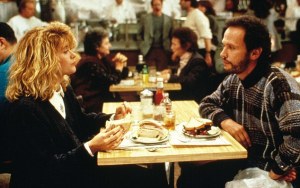 As someone who got taken to the airport a number of times, and then wasn’t, that line resounded with bedrock truth. Thus Nora Ephron not only inspired me as a writer, she also helped get me through the complicated, mystifying business of being single.

When Harry Met Sally re-established the template for the platoons of imitation romcoms (as they came to be known) that followed: two appealing people who have no reason not to be together nonetheless conspire for a couple of hours to remain apart–only to finally come together happily at the end.

Sleepless In Seattle, which Ephron directed to great success, followed this recipe (two attractive people, Tom Hanks and Meg Ryan, on opposite sides of the country overcoming great odds to get together).

You’ve Got Mail  reworked much the same formula: two likable people (Meg and Tom again) meet in an online chat room and fall in love via e-mail.

The movie was released in 1998, just as the world embraced the e-mail revolution and began to change accordingly, much the same way it now embraces the iPad, and changes accordingly. Since it is nearly fifteen years old, You’ve Got Mail is as outdated as the dial-up connection that is featured (complete with the electronic buzzing sound you heard just before the connection kicked in).

But then Ephron’s movies were becoming dated even as she made them, Hollywood turning away from adults to concentrate on special effects and small boys of all ages inclined to buy the toys the movies promoted.

Now they are not only dated they are all but extinct. Hollywood is no longer interested nor does it have the man (or woman) power to create Ephron’s sort of fluffy, intelligent adult fairy tales in which home truths about relationships (ride to the airport, anyone?) poke through a well-decorated world where everyone lives in apartments to die for, eats good food, and never fails to say something witty while great old pop songs play in the background.

Ephron’s last movie, Julie & Julia, was surely the happiest film biography (Meryl Streep as Julia Child learning the art of French cooking) since James Cagney starred in Yankee Doodle Dandy: no miserable childhood, no drugs, no despair over fame, a wonderful marriage, and a happy ending. 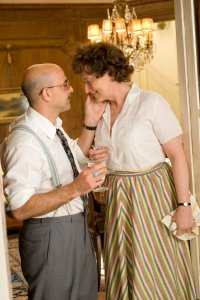 Ephron knew real life was not like that, or it wasn’t like that for long, a knowledge reflected in the ruefully humorous edge she brought to her essays, particularly when it came to aging (I Feel Bad About My Neck says it all).

But in the movies she understood intrinsically that the best films transport you into a dream state where the unreal is somehow real.

As for me, I survived nearly a decade of intermittent rides to the airport while being single, and, to my astonishment, ended up in something like a  Nora Ephron movie: two appealing people against great odds finally came together and, with “Over The Rainbow” playing in the background, lived happily ever after eating good food in a house to die for.