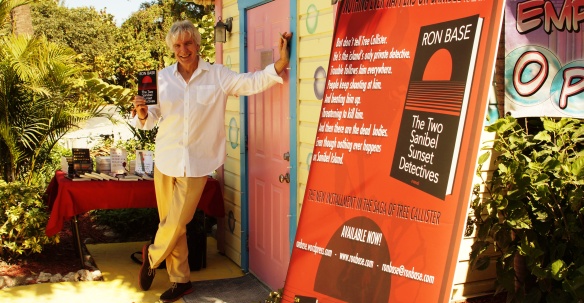 If I’ve learned anything the past couple of months it is this: Do not do a book signing with a blind raccoon.

Trouper is the raccoon in question. Kyle Miller has written a children’s book devoted to Trouper’s adventures. She brings him along when she does a book signing. Guess who gets all the attention? Suffice to say it is not authors, ahem, of a certain age, flogging mystery novels.

Raccoons aside (although blind raccoons are difficult to put aside), you encounter the most fascinating people in the course of promoting The Sanibel Sunset Detective novels in South Florida, and you come away with the most amazing stories–cops and movie moguls and widowers, even a bittersweet reminder of a long ago teenage romance.

A Republican state senator, Judy Lee, who has represented a North Dakota district since 1995, buys a book, as do the charming parents of Emma McLaughlin, one of the authors of the mega-selling The Nanny Diaries.

A speechwriter for, among others in the President Obama Administration, U.S. Defense Secretary, Chuck Hagel, drops by. You meet former staff sergeant Charlie Willis who saw action in the First Gulf War, and ended up in communications at the Bill Clinton White House. What did he think of Bill and Hillary? Charlie grimaces. “Not much,” he says.

Then there are the husband-and-wife Chicago police officers, Marti and Ed. When they met, it was as patrol car partners. They were called to an incident involving an armed man. When they appeared, the gunman opened fire.  Ed stepped in front of Marti and took the bullet intended for her. Badly wounded, Ed  nonetheless had the wherewithal to shoot and kill the gunman.

Marti saved his life by getting him quickly to hospital and then stayed with him until he recuperated. While she was sitting there hour after hour caring for the man who risked his life to save her, she began to think, This might be the kind of guy you could marry.

After he recovered, they did just that.

You meet so many fellow authors, to the point where you begin to suspect there are more authors than readers. Technology really and truly has changed the landscape for writers. The most unexpected people now publish their own books.

At the Big Arts Center on Sanibel Island, Hollywood mogul David V. Picker has a book to flog, a memoir of his years running United Artists and then Paramount and Columbia Pictures, rather awkwardly  titled Musts, Maybes, and Nevers.

Picker self-published his book through Amazon’s CreateSpace. It’s a very good book from the man who ran United Artists at a time when it was the most innovative studio in Hollywood. Picker oversaw the acquisition of the James Bond franchise, and green lit such classics as Tom Jones, A Hard Day’s Night,  Midnight Cowboy, and Last Tango In Paris.

Even as he delighted in his hits, Picker made certain his audience knew about his misses as well, particularly the George Stevens disaster, The Greatest Story Ever Told, one of the great financial flops of the era. Picker said he knew he was in trouble when John Wayne, portraying a Roman centurion, appeared on the screen.

The Duke looked down at Max von Sydow, who was playing Jesus Christ, and intoned in his trademark American drawl: “Surely, this man is the son of God!”

Doing book signings, you never quite know who is going to walk into your life or what ancient memories will be stirred. In high school in the Eastern Ontario town where I grew up, I dated a teenage beauty named Gabrielle. She soon dumped me for a guy with a sports car. I only had a Volkswagen Beetle with no fuel gauge. I was crushed.

Years later, in Toronto, single at the time and now driving a car with a fuel gauge, I encountered Gabrielle again. Destiny, I thought. We were meant to be, after all. I asked her out. She readily agreed.

At dinner, she began to cry. Was it me? Usually it took more than one date to start people crying. No, she said, she had just broken up with her boyfriend, and was still getting over it. Okay, I thought, we will get past this. After all, this is destiny; we were meant to be.

Another dinner. Gabrielle cried more. I began to think this wasn’t so much destiny as a woman in love with another guy. I departed the scene. Gabrielle returned to her boyfriend.

Now I am standing at the Fort Myers airport, silently lamenting my recent ill fortune at having become, against my will, a senior citizen, when I am approached by a small, sinewy man. He recognizes my name, but from where exactly?  Robert became successful selling cars  in Toronto, but before that he worked for a radio station in Brockville, Ontario. Well, I was from Brockville, I said.

Maybe that was it, he said. Maybe the girl he dated in Brockville had mentioned my name.

Oh, yeah? I said. What was his girlfriend’s name? Gabrielle, he said.

This was the guy! Robert was the boyfriend who had caused the dinner tears, the guy who had defeated my sense of  destiny. As it turned out, he and Gabrielle were not destined to be either, but he still stays in touch with her. She is in her sixties now–hard to imagine–an interior designer, apparently none the worse for surviving all these years without either of us.

Two ex-boyfriends thrown together on the concourse at the Fort Myers airport can only shake their heads and laugh at the improbability of this encounter. I do what any author would do under such circumstances–I sell him a book.

And then there are the sad stories.

People tell you about the heartbreak in their lives. At the airport again, I talk to a woman on her way to bury her son-in-law who has died unexpectedly of cancer. A sad-looking white-haired man named Jeffrey wanders by, looking a little lost. We begin to talk. He has been on Sanibel Island trying to put himself back together again after the death of his wife three months ago.

They were in New York celebrating their anniversary. She was tired, but there was no other indication anything was wrong. Then she collapsed. Rushed to hospital she died sixty hours later. A rare auto immune disease. You love someone for so many years and then she is gone, Jeffrey said. What do you do?

What do you do? The author is left speechless. And in tears.

All of a sudden a book signing with Trouper the blind raccoon doesn’t seem so bad.