Many years ago, a young reporter trundled off to Port Hope, Ontario outside Toronto to interview Farley Mowat.

The best-selling author of such ground-breaking Canadian non-fiction as People of the Deer and   Never Cry Wolf was deathly ill with the flu that afternoon. Nonetheless, he and his wife Claire rallied around, fed the reporter lunch, and then Farley sat for hours into the evening, engaging in the most delightful and plain-spoken conversation.

Back then it was unusual to hear anyone railing about the environment. Farley railed. He was delighted and proud that the Americans had refused to let him into the country. He said it was all right with him if he never went back there.

Pierre Trudeau was prime minister and he and his then-wife Margaret had visited Farley at his summer place on Cape Breton. By that time, Farley was ambivalent, if not downright critical of Trudeau. Even so, he went about making the prime minister and his wife feel at home.  During their visit, Margaret had abruptly sat up, opened her blouse, and breast-fed baby Justin.

The sight of Canada’s first lady breast-feeding in Farley’s sitting room while the prime minister of the country chatted away, filled Farley with a certain awe. The reporter has often speculated since at Farley’s reaction as that baby grew up to become the leader of the Liberal Party.

Farley was opinionated and feisty that afternoon in Port Hope but also warm and generous. You didn’t have to spend much time with him before you started thinking you had made a friend for life. Well, perhaps not a friend, but certainly an acquaintance. For years afterward the reporter would run into Farley at various events, and Farley always remembered. 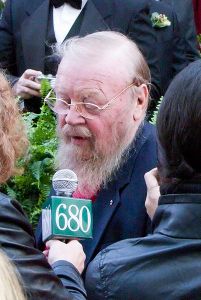 The young reporter is not so young any more and now Farley is gone, and so is one of Canada’s most original characters. In his long writing life Farley published over forty books that sold seventeen million copies, likely making him Canada’s best-selling author.

He was part of a now almost-extinct breed: the literary celebrity. He was at the spear point of a ground breaking generation of authors–Pierre Berton, Margaret Atwood, Mordecai Richler, and Peter Newman among them–who formed the early  backbone of CanLit, and against all odds helped keep Canadian book publishing alive. That group is mostly  gone now. Only Atwood and Newman survive.

Nearing the end of a long, wonderful afternoon, Farley admonished the young reporter to be as critical as he wanted; he hated puff pieces, he said.

The reporter tried hard to be critical, he really worked at it. But he could not quite pull it off.