By the time I arrived at Studio 8H on the eighth floor of New York’s Rockefeller Centre to profile the young Toronto-born producer Lorne Michaels, what was then called NBC’s Saturday Night (later changed to Saturday Night Live) was already a hit.

Michaels was struggling to put together the first live telecast of the show’s second season without its breakout star, Chevy Chase. He had surprised everyone by jumping ship to make movies. Now he was on the phone to Michaels asking how preparations for the new season were coming along. “We’re doing fine,” Michaels reported. “Everything is great.”

Their conversation was surprisingly cordial given Chase’s unexpected exit. Michaels hung up and drank from the big water jug he carried with him everywhere. At the time I met him, he was best known in Canada as part of a comedy team with his friend Hart Pomerantz. They had done a TV show together called  The Hart and Lorne Terrific Hour.

Michaels  was small, intense with long black hair, already starting to turn gray. He was not yet quite the TV wunderkind he was to become, but he was riding high at that point–and he knew it.

In fact, the combination of ego and arrogance at work inside Studio 8H as the cast rushed to prepare the show was something to behold. I had never seen anything quite like it. Here was a group of young comedians, the toast of New York, everyone clamoring for them, overnight stars in the firmament, and not, I thought at the time, reacting to it with particularly good grace.

Even Dan Aykroyd, who I knew from Toronto back in the days when he was getting started as a writer for a late night variety show called Everything Goes, starring comedian Norm Crosby, was standoffish. John Belushi, who, after Chase, was in the process of becoming the show’s reigning star, was all but unapproachable.

One day I was on the Rockefeller Centre elevator. The doors opened and Belushi hurried in looking, as usual, sweaty and disheveled, thinning hair flying everywhere. He was studying script pages, shaking his head, and making disparaging sounds. Trying to make conversation, I asked him how it was going. He just looked at me, snapped “Fine,” and went back to the pages.

(By contrast, a few years later, I visited the set of SCTV, a show I thought was much, much funnier than Saturday Night Live ever was. The cast was working away in the frigid reaches of Edmonton. John Candy (whom I’d also known from Toronto), Martin Short, Eugene Levy, Catherine O’Hara, Joe Flaherty, Rick Moranis, Dave Thomas,  and Andrea Martin could not have been warmer or more welcoming.) 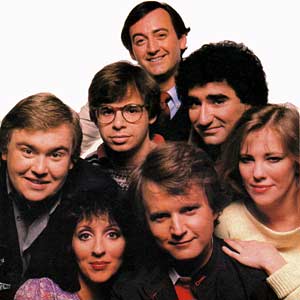 In fairness, everyone connected with Saturday Night was  under immense pressure, knowing they would have to perform live in a couple of days with all critical eyes on them, wondering if the innovative comic momentum from the first season could be maintained.

The guest host that week was Norman Lear, wearing his trademark porkpie-type sailor’s hat, himself riding high as creator of Maude and All in the Family, as well as some of the most popular and critically acclaimed shows on television, and not about to take guff from a bunch of upstart young whippersnappers.

Lear had prepared a tape featuring cast members from his TV shows making fun of their boss. It was supposed to be a comic bit to introduce the host. The problem became apparent  as Lear played the piece for Michaels–it wasn’t very funny. 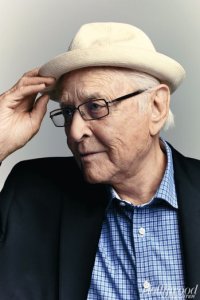 Michaels tried to diplomatically suggest the piece shouldn’t be used. Lear’s face hardened. “A great many people gave their time to be part of this,” he said to Michaels in a cold voice.

Aykroyd, meanwhile, had been working all week on a sketch featuring then-President Jimmy Carter. It was his signature impersonation, the thing he was becoming best known for. I was present the first time he ran through the sketch, and it was a hoot. Everyone was doubled up with laughter.

Then Michaels came in and got his hands on it. This is what he did best, he had told me, taking the writers’ material, honing and shaping it, and making it funnier. This time it didn’t work. The more Michaels edited and changed Aykroyd’s sketch, the less funny it became.

As the week wore on, the whole show began to unravel mostly because Michaels kept injecting himself into the process. Saturday evening arrived, an eager audience filled the seats in the studio for the first run through. This was done each week to test out the material so that final changes could be made before the show was broadcast live at 11:30 P.M.

The audience sat quietly through most of the show. The Norman Lear bit didn’t get much laughter, and Aykroyd’s Jimmy Carter sketch received only lukewarm response. Following the run through, Michaels called everyone together and ordered more changes. Nobody looked very happy.

I retreated to my hotel room a few blocks away to watch the televised show. I could hardly believe it. Michaels’ last-minute tampering resulted in a show that, if anything, was worse than the rehearsal. That first show of Saturday Night’s second season was generally regarded as a disaster.

Forty years later, Saturday Night Live, about to start a new season (with a 40th anniversary special Feb. 15), has survived any number of ups and downs to become a long-running TV fixture. That original cast featuring Dan Aykroyd and John Belushi has been replaced many, many times and has spawned seemingly endless numbers of comedy stars.

Lorne Michaels, at the age of seventy, has evolved from this intense kid running around in jeans with a jug of water to a bespoke-suited entertainment power broker involved in everything from TV (he now produces The Tonight Show) to movies (The Guilt Trip) to Broadway. He still produces Saturday Night Live, of course, and he gives interviews saying that whatever else he does, that show still comes first.

Saturday Night Live has never been as good as it was that first ground-breaking season. I don’t watch the show much any more, but every time I do, it’s usually a disappointment. All these years later, I still imagine Lorne Michaels’ strong hand poking into it each week, making those last-minute changes that are supposed to make it funnier.