At Barney’s Beanery With the Guy Who Created Jaws 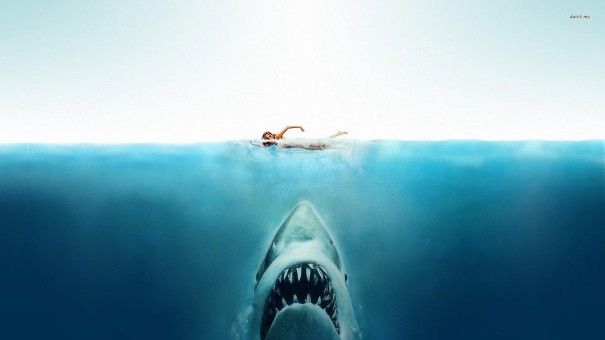 In the years I lived in Los Angeles, I occasionally hung out at a legendary West Hollywood eatery called Barney’s Beanery. Mostly, I sat with screenwriters in late middle age, all of us grumbling about the state of a movie industry that either wasn’t interested (in my case) or had moved on to younger writers (most of the others present).

One of those who showed up from time to time was a writer named Carl Gottlieb. Carl wasn’t standoffish, but he was quiet, and, despite his scruffy appearance, he gave the impression there was something about him a little more important than the rest of us lesser mortals. That turned out in its Hollywood way, to be true.

Carl was the principal screenwriter of Jaws, the groundbreaking 1975 classic that established Steven Spielberg as a director and forever changed the way movies are made and marketed—a fact that has been pounded to death in the last week or so as Jaws celebrates the fortieth anniversary of its release.

During our encounters at Barney’s the subject of Jaws never came up. But when I was writing a book about movie stardom titled If the Other Guy Isn’t Jack Nicholson, I’ve Got the Part, I got in touch with Carl and spoke to him at length about his involvement in the movie. To this day, he remains the film’s unsung hero, next to Spielberg the guy most responsible for the movie’s success.

Carl said his involvement with Jaws began one Sunday afternoon when he got a call from his friend Spielberg. Carl had kicked around Hollywood for a while, working as both an actor and a comedian, but at that point he had no screenwriting credentials. Spielberg, who was twenty-six at time, said he wanted to get together at the Bel Air Hotel. Carl knew his friend was to direct a film based on the Peter Benchley bestseller titled Jaws, about a great white shark terrorizing a New England town. In fact, he had already read the early screenplays by Benchley, so he was willing to take the meeting. When did Steven want to get together? 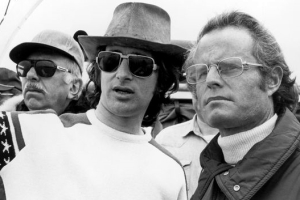 When Carl arrived at the hotel, he found Spielberg with Richard Zanuck and David Brown, the producers of Jaws. Nobody was happy with the script, and production was about to begin on Martha’s Vineyard. Universal Studios thought of this as nothing more than another disaster movie in the style of the prefabricated products such as Earthquake and Airport 1975 the studio had been profitably churning out.

Spielberg and the producers had different ideas, however. Did Gottlieb have any suggestions how the script might be improved so as to get it away from the usual disaster movie clichés? Drop the Mafia subplot that was in the book, Carl immediately suggested.

The producers liked that, and so the next thing Carl knew he was sharing a rented house on Martha’s Vineyard with Spielberg, daily rewriting the script and helping with the casting of the movie. Carl, for example, pushed hard to hire veteran actor Sterling Hayden, best known for John Huston’s The Asphalt Jungle, and Kubrick’s Dr. Strangelove to play the part of Quint, the half-mad fishing boat captain enlisted to go after the great white.

A former schooner captain who had run away to the sea at the age of sixteen, Hayden seemed perfect for the role. However, he was having tax problems with the Internal Revenue Service and couldn’t come to the U.S. from the houseboat he occupied in Paris on the River Seine. There was also talk of Lee Marvin as Quint, but no one associated with the production could quite remember if a formal offer was ever made. Zanuck and Brown, having worked with the British actor Robert Shaw on The Sting, decided to go with him.

Joel Grey, who had recently won an Oscar for his role in Cabaret, was lobbying hard for the role of the marine biologist. However, Carl and Spielberg were friends with Richard Dreyfuss who had recently broken through in American Graffiti and The Apprenticeship of Duddy Kravitz. They wanted him.

The problem was, Dreyfuss had already twice turned down this “fish story.” Carl got on the phone with him. “It’s all rewritten, it’s all changed,” he reassured the actor.

Dreyfuss was in the middle of travelling around promoting Duddy Kravitz, but he agreed to get on a shuttle and come to Martha’s Vineyard for a meeting. “As soon as he walked in the room,” Carl remembered, “he had that beard, those glasses, that hat—the same as the movie—and he was the character.”

There has been  debate over the years about who provided the film’s most famous scene: On the eve of the final shark attack, Quint describes the torpedoing of the destroyer Indianapolis during the Second World War and the subsequent mass shark attack that decimated the ship’s survivors.

Carl said it was the playwright Howard Sackler, himself an avid sailor, who remembered the Indianapolis  incident, and used it in the first version of the script written with  Benchley. Carl liked the reference and as Spielberg approached the filming of the climatic sequence, he lobbied the director to include the Indianapolis reference in the sort of lull-before-the-storm speech that was a mainstay of so many of the war films he had watched over the years.

Shaw, a playwright himself, was not happy with the scene despite efforts to bring it to life from both John Milius (who wrote Apocalypse Now) and George Lucas. Finally, the night before the scene was to be shot, Shaw gathered together the various versions, took them away and distilled everything into a single page which he presented to Carl, Dreyfuss, and Spielberg after dinner. With lights dimmed, Shaw acted out the scene for them. Everyone sat in stunned silence when he finished. Carl said not a word was changed when Spielberg shot the scene the next day.

Carl witnessed one more piece of film history just before Jaws opened. After a sneak preview at a theater in Orange County, he was standing in the lobby with Spielberg when Lew Wasserman, the chairman of MCA, the conglomerate that owned Universal, and Sid Sheinberg, the president of the studio, decided they would not play Jaws in a few hundred theaters, the usual way movies were distributed in those days. Instead, they would open it in nearly a thousand theaters. That summer of 1975, Jaws became a phenomenon, earning a then-unheard-of two hundred million dollars at the box office.

The decision made in an Orange County theater lobby certainly changed the way movies are distributed. Whether it changed movies in general, however, is open to argument. The more likely culprits appeared a couple of years later when Star Wars was released in 1977, followed by Superman a year later. The studios began to see that fantasy, long relegated to comic books and Grade B movie serials, could be the source of previously untapped profits. Thus the blockbuster was born, to the detriment, many would argue, of the health of movies in general.

What was soon forgotten, as former Variety editor Peter Bart has pointed out, is that those original movies were created by passionate filmmakers with a personal vision, nothing like the cookie-cutter CGI superhero extravaganzas that now dominate the summer box office and which have become the coin of the realm for the major studios to the exclusion of everything else.

Spielberg, of course, went on from Jaws to become the era’s most powerful and successful filmmaker with a fortune estimated (by Deadline Hollywood) at four billion dollars. I lost track of Carl Gottlieb when I left Los Angeles, but it is safe to say he has suffered the fate of most Hollywood screenwriters, has been mostly forgotten, and is not worth four billion dollars.