The Greeks are finished (Eurogeddon!), the Chinese are collapsing, a strike has closed the London underground for the first time in thirteen years, everyone is shocked—shocked!—that a Conservative government would slash welfare benefits in its latest budget and, sadly, it is the tenth anniversary of the bombings that killed thirty-eight people..

Those are the more inconsequential stories one ignores in the rush to devour the much more important news here in the United Kingdom. The wife of a British MP, notorious for posting selfies on-line showing off a now famous décolletage, has been accused by her husband of having an affair with her trainer. Her husband is reeling; she is denying all.

And, of course, there is the biggest British story of them all, the christening of royal baby Charlotte: “Spirits of Diana guides Charlotte’s christening,” reports the Sunday Times.

Arriving in town on the eve of Eurogeddon, I know little of Greek economics and absolutely nothing about cheating politicians’ wives (Canadian scandals have nothing to do with anything as interesting as sex), or wasted pop singers (except Amy, the controversial film documentary about singer Amy Winehouse that has just opened here). 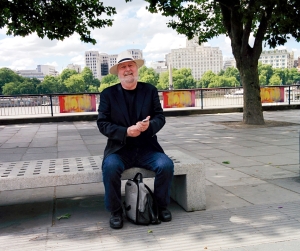 My intention in being in London for the next month is no more serious than getting to know better a city I have visited often without spending any real time here. While my wife Kathy takes a course at Central St. Martins, a leading school of art and design, my plan is to explore London, with help from my longtime comrade-in-arms, Ray Bennett, editor, journalist, budding author,and London expert extraordinaire.

Bennett, promptly on the job, whisks me off to the British Film Institute where a morning press conference has been called to present an ambitious program reviving British film, everything from documentaries to features, to home movies. Watching excerpts from the home movies—locals cross-dressing, kids rolling tires down embankments—as well as the carry-on-Britain-stiff-upper-lip documentaries, Bennett leans over and whispers, “No wonder Monty Python came out of this.”

My idea of living in London is a lovely terrace flat in Regent’s Park, the sort of place where the inhabitants of Downton Abbey might be found while popping into the city for a visit. Unfortunately, you must be in charge of one of the oil emirates these days to afford that sort of accommodation. Instead, we have headquartered ourselves not far from Portobello Road.

I thought we were in Notting Hill, but, as I usually am when it comes to geography, I am wrong. We have rented an apartment at the somewhat legendary Trellick Tower in the Royal Burrough of Kensington and Chelsea.

You can’t miss Trellick Tower on the landscape around here; it, well, towers over everything, thirty-two stories in height, looking like, depending on the limits of your imagination and the angle from which you view the building, either an exposed computer circuit board attached to an ancient aboriginal totem or an art deco masterpiece imprisoned in a German expressionist nightmare by Fritz Lang.

Some unkind folks deem it plain ugly and an eyesore in the neighborhood, and it is, to be honest, as is noted in its Wikipedia entry, “a little rough around the edges.”

Like most things in London, Trellick Tower comes with history. Its design rose from the imagination of the Hungarian architect Ernő Goldfinger—and yes, Ian Fleming got into a discussion with Goldfinger’s cousin on the golf course and the next thing the author titled his latest James Bond novel, Goldfinger. 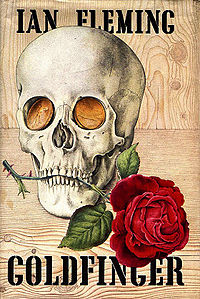 You have only to stand in front of Trellick Tower to realize Goldfinger had no sense of humor (he even tried to sue Fleming for using his name; he got six free copies of the novel, instead). The tower was one of a number of structures he designed to help alleviate the post-World War II housing shortage.

Goldfinger created his building blocks in the Brutalist style, from the French béton brut or raw concrete, popular with governments in the 1950s, but not a big hit with the people who had to live in them.

Originally, Trellick Tower was made up of so-called council flats, what in North America would be termed affordable housing. In the 1970s, the block had a reputation for crime and violence. People refused to live there.

After a time, however, flats were made available for sale and that helped to transform the building. Depending on who you talk to, Trellick Tower now is either a trendy address where apartments are going for as much as a million dollars or a real estate nightmare full of flats that aren’t selling. 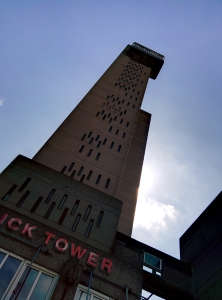 Certainly it is now a local landmark, designated a listed building, that is a structure of special architectural and historical interest. Numerous movies have been shot here, T-shirts display the tower, and the British rock band, Blur, featured Trellick Tower in a song (“Trellick Tower is calling…”).

For me it’s a fascinating place to spend the next month, with a breath-taking view of London from our pleasant twenty-seventh floor apartment, a colorfully diverse community, a cacophony of languages, and a warm welcome for a couple of Canadian interlopers.

There are remnants of its bad old days. A sign by the elevators warns the person who has been spitting on the floor that CCTV security cameras are now installed, and the miscreant can be identified.