Home › Uncategorized › A Month In Provence: What? I’m Not In Provence?

The black bulls are charging outside our apartment in Uzès.

We are in this medieval French town to spend the next month experiencing the joys of Provence. Who knew about bulls?

Les tauraux  are part of the tradition and commerce in the region, and we have arrived for the Fete Votive, an annual celebration highlighted by the running of the bulls along the Boulevard Gambetta, the town’s main drag—an unexpected start to our time in Provence.

Except, monsieur, désolé, but you are not in Provence.

As usual, my geography in these matters is shaky, although in fairness, pinpointing what part of France we are in depends on who you talk to. Peter Mayle, author of A year in Provence, a local resident and something of an expert in these matters, while acknowledging the confusion over what exactly constitutes Provence, pronounces that anything east of Avignon is Provence. Anything west is not.

For the purposes of tourism, and with a bow to a certain amount of snobbism, there is an inclination to attach the town to Provence, my lame (and snobby) excuse for thinking that’s where we were headed. Accuracy and the French government places it in the department of the Gard, in the region of Languedoc-Roussillon in the arrondissement of Nîmes.

Never mind. Wherever you choose to locate it, Uzès occupies its own unique space, a sort of timeless French Brigadoon rising out of the misty countryside, surrounded by vineyards and fields of lavender, graced by plane trees, overseen by The Duchy, not quite a fairy tale castle—too many rough and tumble architectural influences for Disney-type fantasy—but a looming reminder that this is an ancient town of old stones, medieval stones built upon Roman stones topped by Renaissance stones.

Someone has lived here since the dawn of civilization. The Romans put it on the map, constructing an aqueduct from a spring in Uzès that ran fifty kilometers to the town of Nîmes where the first century inhabitants enjoyed running water and flush toilets.

That ended after five hundred years with the arrival of the Visigoths who did not wash, thus entering an unfortunate era where nobody much bathed, which led to the invention of French perfume. But perhaps we are getting ahead of ourselves.

The remnants of what used to be called Gaul are very much in evidence throughout the region, from the Roman ruins in Lyon to the well-preserved amphitheater in Nîmes (where they still hold bullfights twice a year) to the region’s piece de resistance, the Pont du Gard, not far from Uzès, built to bring water across the Gardon River, and still very much as it was in Roman times—except now you can kayak on the river beneath the bridge’s arches, something that presumably the Romans never did. 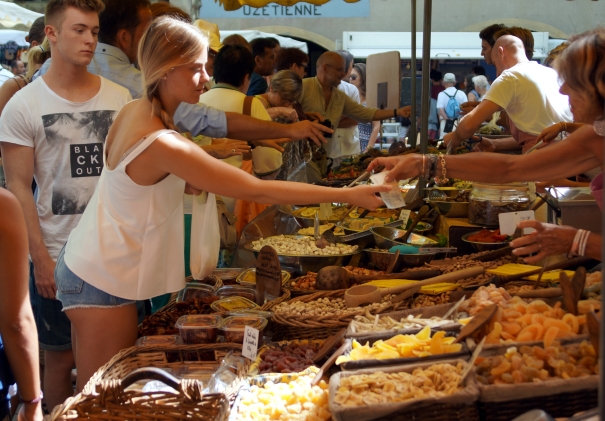 Our large, airy apartment overlooks the Place aux Herbes, known for its Saturday morning market, bursting out of the square, crowding both sides of the Boulevard Gambetta. In August, the market attracts almost as many visitors as the bulls. You can hardly move for people clamoring for figs, and melon de Cavaillon, strawberries, locally produced sausage, olive oil, chickens with their heads still attached (so you know they are fresh?), lotte, durade (or sea bream), tuna the size of a small shark, pâtés, men’s and women’s clothing, local art.

Not everything you can imagine, but close, all of it erected in a clamor beginning at five in the morning, disturbing the starlings in the plane trees, waking the weary outsiders in the apartment above the square, ready by nine o’clock and then stripped down again at one.

The merchants around the Place aux Herbes are delighted with the influx of tourists. Business has never been better, they say, what with all the French families here for the traditional August holiday. In the cafes surrounding the square and on Boulevard Gambetta you can barely find an empty seat. If you do, you are soon reminded of an abiding fact of French life in the twenty-first century: everybody still smokes.

It remains an astonishing phenomenon coming from the comparatively smoke-free environs of North America. Here mothers stroll along pushing a carriage or pulling a child with one hand, casually and unselfconsciously puffing on a cigarette with the other hand. Cigarette butts are everywhere, clogging the cobblestones.

In Paris, the problem of cigarette butts is so great—three hundred and fifty thousand tons collected each year—that you can be fined for dropping one on the street. That doesn’t appear to have changed anything. The streets are littered not with dog merde but discarded cigarettes.

There is no escaping the smokers, but you can drive out of Uzès to investigate the neighboring towns, each featuring a singular attraction.

Nearby, Saint Quentin la Poterie is known, as its name suggests, for pottery. Isle-sur-la-Sorgue, picturesque under a blazing sun on the Sorgue River, boasts antiques markets. The hilltop redoubt that is Ménerbes is the scene of author Peter Mayle’s bestselling A Year in Provence, although he no longer lives in the farm house outside of town featured in the book.

Avignon provides ancient fortress walls, Le Palais du Papes, or the Papal Palace, the seat of Western Christianity during the fourteenth century, and the iconic le Pont d’Avignon, the bridge across the  Rhône River that doesn’t quite reach across the Rhône, but never mind, everyone comes to stand on it, anyway.

An hour or so away, the seaside town of Le Grau-du-Roi offers—exactly what it offers eludes this visitor, save for sea views, a wide plage, and impressive sand castles whose artists accept a Euro or two in payment for your admiring looks.

Anduze sits not far from the Grotte du Trabuc, twelve kilometers of vertigo-inducing underground caverns that only Nature’s wildest imagination could create. Anduze itself turns out to be an unpretentious gem with a restaurant, Le Cévenal, offering more luncheon escargots that this lover of snails has ever seen.

You can quickly become caught up in the dreamy, sun-drenched rhythms of life in the Gard: the walks through cobbled streets, the daily ritual of the baguette, the Comté cheese, the duck liver mousse (definitely the duck liver mousse), the morning smell of freshly baked croissants escaping from the local patisserie, not to mention—God help you—the cheap allure of accordion music drifting up through open windows into your apartment from the Place aux Herbes. All the clichés of living in the south of France that you swear are not going to seduce you, seduce you.

This is the fantasy of a life in France, of course, the unreal made real for a time. Not so far away thousands of desperate refugees fight and die to escape Middle East wars while European governments procrastinate and debate. In Paris, the government wrestles with what to do about a growing and restive ethnic population, not far removed from the horrors of the Charlie Hebdo massacre.

None of this penetrates the timeless stones of Uzès. Brigadoon dreams on through the summer heat, making it far too easy to ignore reality.

Soon enough, though, August is swallowed into cooler September and the crowds abruptly are absent from Place aux Herbes and the Boulevard Gambetta. Everything quiets. It is nearly time to return to a place where no bulls run on the street, where they do not bake the baguettes daily, and where, sadly, you can once again understand what people are saying, and where, most of the time, you don’t need your wife to translate.

There is a final romantic dinner in the garden at Le Bec a Vin, a last moonlit stroll through the old town, shadows dancing off the stone walls, those old, old stones, a saddened sense that you are leaving…where?

Well, you are not leaving Provence. Or are you?