Even though they had already been hugely popular in North American newspapers for at least twenty years, King Features, the granddaddy of newspaper syndicates, is celebrating the one hundredth anniversary of a lost, all-but-forgotten art form: the comic strip.

As far as anyone can figure, the first newspaper comic strip originated in 1895 from an artist named Richard Outcault. He created a strange, bald-headed little boy in a nightshirt and called him The Yellow Kid. The Kid spoke in balloons, hung around a squalid tenement area called Hogan’s Alley, surrounded by a recurring cast of characters.

By the time media baron William Randolph Hearst acquired The Yellow Kid as part of his newly-formed King Features, the strip was already hugely popular. Hearst had learned that one of the best ways to attract readers was to give them comic strips. As the century progressed, and big city newspapers became more and more competitive, their comics sections were powerful circulation boosters in ways unimaginable today.

Large numbers of readers did not buy the paper for news, but for the comics, particularly with the introduction in the 1930s of the continuing adventure strip. In 1934 alone, such enduring comic characters as Flash Gordon, Jungle Jim, Li’l Abner, Mandrake the Magician, and Terry Lee of Terry and the Pirates came into existence.

Terry was drawn by a young cartoonist from Ohio by the name of Milton Caniff. Initially, a boy bouncing around what was then known as “the Orient”, Terry was aided by his journalist pal, Pat Ryan, outwitting a band of pirates led by the mysterious but very sexy Dragon Lady.

What brought the stories to life was Caniff’s superb draughtsmanship. He created beautifully-drawn panels, black and white through the week, blazing with color on Sundays, done in shadow and light and changing points of view reminiscent of the movies.

Through the thirties and forties, Terry became the most popular comic strip in America, his adventures followed daily by thirty-one million readers, his creator dubbed the Rembrandt of cartoons. In the 1940s, Superman, Batman, and Wonder Woman were crudely-drawn comic book characters. The real talent in both illustration and story-telling was found in the comics section of your daily newspaper.

I grew into a teenager idolizing Caniff and the way he drew, wanting to become a newspaper cartoonist just like him. Back then, the daily newspaper strip was a way of escape. Movies could be visited at most once a week. Television was limited and closely watched over by parents afraid it would rot my brain.

That left comics. They would rot brains, too, so I was restricted to one comic book a week. However, nobody ever objected to the weekend comics section of the newspaper.

By the time I discovered Caniff, he had abandoned Terry for a new character, Steve Canyon, an Air Force colonel, blond like Terry, but much more the two-fisted, womanizing (in a gentle sort of way) globe-trotting adventurer. It was not lost on my youthful eyes that Caniff, in addition to being able to summon far-off places filled with fascinating characters with a few strokes of an India-inked pen, also produced the most alluring heroines (and villainesses) in the comics. In those days, one took sexuality where one could find it, and, curiously enough, it often could be found inside the panels of Steve Canyon. 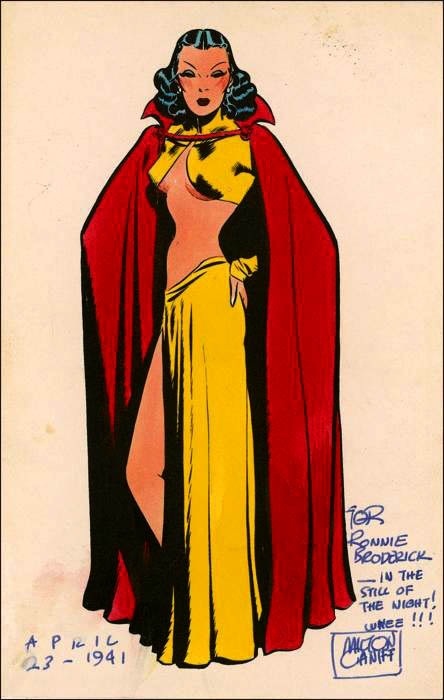 Caniff inspired me to become a cartoonist. I enrolled in the John Duncan Correspondence School of Comic Art. Duncan, a professional cartoonist who lived in Florida, sent me four thick binders full of instructions on how to draw. There were assignments to be completed and each week I would mail my drawings off to John Duncan who made corrections and sent them back. Each time I opened the corrected assignments, my heart sank as I realized I was not making a whole lot of progress as a cartoonist.

Nonetheless, I kept at it, obsessed, sitting hour after hour at the drawing board I had constructed, set up in my bedroom, in front of a window overlooking main street in Brockville, where we were living.

I even created my own Steve Canyon-like adventure comic strip. My hero was Garrett Champion. Gregory Peck in The Guns of Navarone, became the model for Champion. Like Canyon, my guy was a two-fisted adventurer, some sort of secret government agent as I recall, embroiled in various international intrigues that invariably involved my idea of a scantily-clad femme fatale.

By the time I gave up in frustration, I had drawn hundreds of panels on lengths of Bristol board. I’m not sure what happened to them. I suspect my father threw them away after I moved out. However, as an experiment, I sat down the other day and tried to recreate one of those Garrett Champion panels, discovering that I am no better today than I was all those years ago (the shaky results are on view above).

By necessity, Caniff spent his life sitting at a drawing board. This is made clear in Meanwhile… the fine, nearly one thousand-page biography of the artist written by Robert C. Harvey.

Adventure strips in their heyday ran seven days a week, three hundred and sixty-five days a year, no repeats, no summer hiatus. What’s more, Caniff had to do it so as to keep reminding readers of the plot and at the same time, keep the story churning forward complete with a daily cliffhanger. Then he had to rearrange the story for the full-page Sunday color installment so that readers who didn’t follow the story during the week, could also keep up with it.

In the early days of Terry and the Pirates, Caniff and his wife lived in a Manhattan apartment. They were, according to Meanwhile…, quite the sophisticated party people—except the party came to them. Late into many nights, their apartment filled with friends fresh from the theater or a movie, sitting around drinking cocktails, gossiping, while in a corner Caniff sat at his drawing board completing the day’s quota. Not until late in life was he able to visit any of the exotic locales he drew.

Caniff’s remarkable artistry and story-telling feats finally have been preserved in a series of beautifully-produced books from the Library of American Comics. Flipping through these volumes, my heart aches that they weren’t available when I was a kid. If I’d had them back then, I would have thought I’d died and gone to comic heaven. As it is now, a much older man can only flip through their pages in head-shaking admiration at what Caniff was able to accomplish.

I didn’t realize it at the time, but even if I had been any good at cartooning, I had arrived too late at the party. As I daily devoured Steve Canyon, that sort of continuing adventure strip was dying, killed off by television and the movies.

Even though Steve Canyon’s readership had dwindled to almost nothing, King Features did not have the heart to fire Caniff. He died in 1988, still at his drawing board. As soon as he was gone, so was Steve Canyon. Even though Terry and the Pirates and Steve Canyon are mostly forgotten today, Caniff’s influence remains strong. Those crudely drawn superheroes of the 1940s have become pop culture icons, rendered in comic books and graphic novels with the sort of artistry, cinematic movement, and attention to detail that almost certainly is inspired by Caniff.

Also, it’s hard to imagine that Terry and the Pirates didn’t provide at least some inspiration for George Lucas and Steven Spielberg when they created the Indiana Jones adventures.

As for that frustrated teenage cartoonist in Brockville, thankfully, he discovered he was somewhat better at writing stories than he was drawing them. But all these years later, still a glutton for artistic punishment, he finds himself back at the drawing board, trying to get Garrett Champion right.

And, of course, failing.

2 comments on “The Lost Comics”