Before the other night, the last time I saw Ryan O’Neal was on an elevator at Toronto’s Park Plaza Hotel. He was accompanied by his daughter, Tatum O’Neal, Helga Stephenson, at the time the Toronto film festival’s director of communications, and longtime pal, Lee Majors, television’s Six Million Dollar Man.

As the elevator reached the ground floor, Lee turned to Ryan to say goodbye. “By the way,” he said, “when you get to L.A., do me a favor and look up Farrah. Make sure she’s all right.”

Farrah, of course, was Farrah Fawcett-Majors, at the time Lee’s wife. Ryan did as his pal asked. Farrah and Ryan promptly fell in love, and the rest is a certain amount of tabloid-fed show business history.

Until then, Ryan O’Neal’s central claim to fame was Love Story, the literary and movie phenomenon of 1970. The film and the subsequent bestselling novel were both written by a Harvard professor, Erich Segal. I got to know Toronto author and journalist Merle Shain who had once dated Segal. She told me that at one point in their relationship, before he wrote the book, they had a terrible fight. Segal phoned to apologize. “Erich,” Merle responded, “love means never having to say you’re sorry.”

In my life as a journalist, I never encountered Ali MacGraw. She blazed so brightly and was extinguished so quickly, but she left a generation of young men, myself included, slightly dazed and not a little lovesick in the wake of her appearances in Goodbye, Columbus and Love Story.

So when it was announced that O’Neal and his Love Story co-star were appearing in a road show production of Love Letters, A.R. Gurney’s enduring two-hander, I had more than passing interest.

Hand-in-hand on a recent Saturday night, Ali MacGraw and Ryan O’Neal came onto the stage at the Barbara B. Mann Performing Arts Hall in Fort Myers, Florida. Iconic Jenny and Oliver are long gone.  She is seventy-seven (her birthday is April 1); on April 20 he turns seventy-five.

The coltish beauty who married movie mogul Robert Evans and then ran off with Steve McQueen when they made The Getaway together, resembles someone’s elegant grandmother, still slim, her gray-streaked hair pulled back into a bun.

O’Neal, the California kid who started out as a boxer before movie stardom and a whole lot of unpleasant headlines involving children on drugs and the death of Farrah Fawcett, has put on weight and a pair of glasses. Now he could play the Ray Milland part of the wealthy father in Love Story. 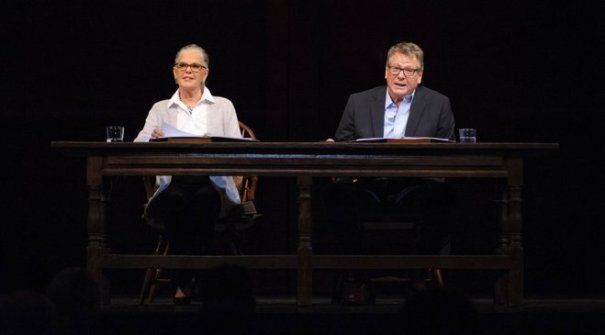 This night they are Melissa and Andrew, not so far from Jenny and Oliver, except this time she is rich and he is not so rich. Seated at a table on a bare stage they face the audience and read the letters addressed to each other over a tempestuous fifty-year friendship. MacGraw is still the free spirit, goading and poking at the preppy O’Neal through two lives swerving from childhood to college and careers, marriages and divorces, success and failures, the two of them alternately fighting to be together and to stay apart. Are they friends or lovers—or both?

Gurney’s play inhabits a stylish fantasy land wherein the participants have money, go to Ivy League schools, pursue interesting careers, and in an age when no one writes such things, manage to write letters that are often more like smart volleys in an ongoing tennis match.

Reading back and forth seated on a stage is not generally regarded as the way to keep modern audiences mesmerized. But somehow Love Letters works a certain magic, aided by Gurney’s wit and restrained sense of pathos and also by surprisingly fine performances from the two stars. As much as we all loved Ali MacGraw in her brief heyday, she was never much of an actress. By the time the producers of Love Letters came knocking, she had long since retired to Santa Fe, New Mexico to pursue her interest in yoga and put acting behind her.

However, on stage in Fort Myers she delivers a delightfully natural and nuanced performance as a brittle, witty young women spinning into middle age and beyond, battered along the way by alcohol abuse and bad marriages.

O’Neal, as he did in Love Story, must carry much of the emotional load, and he does this exceedingly well as the conservative college jock growing into prosperity, the law, and, eventually, the U.S. senate, all the while trying to put the love of his life behind him—discovering he can’t quite do it. He must forever write her one more letter.

As Love Letters unfolds over the course of an hour and a half, it evokes a series of emotions and memories, thoughts of loves won and lost, of time passing—the young man encountering the movie star on an elevator; a fragile Merle Shain fondly recalling how she inadvertently provided the catch phrase that has long outlived her.

At the end, there is a damnable but unavoidable catch in the throat, the emotion you swear you are going to avoid, but that you can’t as Ali and Ryan take their bows and then, shamelessly playing to audience expectations, kiss before exiting, wrapped in each other’s arms.

You leave the theatre, walking into a cooling Florida night, hugging the co-star of your own love story a little more closely.

One comment on “Ali MacGraw and Ryan O’Neal: Falling in Love Letters”