Home › Books By Ron Base

Books By Ron Base

The Four Wives of the Sanibel Sunset Detective

How does one detective end up married four times?

A good question, Tree Callister wishes he had the answer.

All he knows is that three of his ex-wives have arrived on Sanibel Island, off the west coast of Florida, much to the chagrin of Freddie, his fourth wife.

What’s more, all his ex-wives are in trouble.

Before Tree knows it, he is up to his neck in complications, including a jailed ex-wife, his best friend under arrest, a Russian oligarch who doesn’t like him, cops out to get him…

A murder or two.

At a time when he is supposed to be retired and enjoying a quiet life on an island paradise, Tree finds himself in bigger jams than ever, trying to stay alive while he searches for a killer and asks himself that age old question: how does a private detective get married so many times?

Download The Four Wives of the Sanibel Sunset Detective HERE.

The Hound of the Sanibel Sunset Detective

A big, floppy-eared hound dog. Answers to the name of Clinton.

The FBI wants him. The Royal Canadian Mounted Police is hunting for him. All sorts of bad guys are willing to kill each other for him.

What Private Detective Tree Callister can’t figure out is why everyone wants Clinton.

Besides, Tree has retired. He’s no longer the only private detective on Sanibel Island, the laid-back paradise off the coast of Florida.

Except he keeps getting dragged back into a business where people tend to shoot him.

And now there’s Clinton in the life of Tree and his wife, Freddie. Despite their best efforts, they’ve fallen in love with their new pal. Tree is determined to protect him no matter what.

Even if it means getting himself killed.

Ron Base’s latest Tree Callister mystery thriller isn’t only a fast-paced, page-turning suspense novel—it’s also a heartfelt love story about the effect dogs have on our lives, and the lengths we will go to protect and cherish them.

The Hound of the Sanibel Sunset Detective will change Tree Callister’s life—and it might just do the same for readers!

Download The Hound of the Sanibel Sunset Detective HERE.

Except they have no idea what their father does for a living.

They suspect the worst.

That’s where Private Detective Tree Callister comes in. Josh and Madi want him to find out what their father does, and why he keeps disappearing.

But Tree has problems of his own. Everyone on Sanibel Island thinks he’s hiding nine million dollars that has gone missing.

The FBI is investigating him, the local cops are out to get him—and they are not happy that Tree keeps stumbling across dead bodies.

Then there is the diminutive, dangerous Paola who has no hesitation about killing anyone who gets in her way.

It’s looking as bad as it ever has for Tree Callister in his latest—and most deadly—adventure.

And it’s only going to get worse. 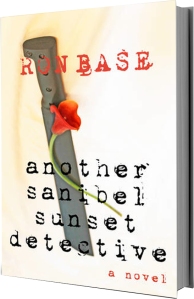 Ron Base’s excting new Tree Callister novel features a mysterious woman who tries to seduce him in Paris and Key West—and may be trying to kill him on Sanibel Island. There is a former director of the Pakistani Secret Service, Miram Shah, who wants Tree to find his missing fiancée. Then there is accused Serbian war criminal Javor Zoran. He spent a week in Key West with the woman he loves. Now she has disappeared. He insists Tree find her. Both men, Tree discovers, are looking for the same woman.

There is also a dangerous doctor with a machete. Actually, Dr. Edgar Bunya says the correct name for his machete is a cutlass. Whatever you call it, Dr. Edgar appears to be a very dangerous individual who threatens to cut off Tree’s hands.

What’s more, bodies start showing up everywhere. From Key West to Useppa Island to Sanibel, Tree keeps stumbling across the corpses. The cops don’t like this one bit. His marriage is in jeopardy, his son is in trouble, his life is being threatened, and time is running out for Tree Callister in his most dangerous and action packed adventure yet.

There is Another Sanibel Sunset Detective and it finds author Ron Base at his page-turning best!

Private detective Tree Callister is in big trouble. For starters, a towering, baseball bat-wielding woman appears to be intent on killing him. Then the beautiful wife of a disgraced media mogul hires Tree because she believes her husband is trying to murder her. In fact, she may be trying to murder him.

Added to that, Tree’s son Chris unexpectedly appears, accompanied by his alluring wife, chased by a couple of thugs who want half a million dollars.Then there are the dead bodies that keep showing up every time Tree turns around.Not to mention the police who charge him with being an accomplice to one murder, and accuse him of committing another. And we won’t even talk about what happens when Tree encounters a couple of hungry alligators.

Tree Callister is not much of a private detective.His first client just turned up at the door and he’s twelve years old. What’s more, the kid has the grand total of seven dollars with which to hire Tree to find his mother. Everyone on Sanibel Island in Florida where Tree lives thinks the former newspaper reporter is out of his mind. His only defender is his wife Freddie, and even she has doubts about her husband‘s new profession.

Then a headless body shows up, along with a threatening thug, the beautiful wife of a convicted media tycoon, a couple of suspicious detectives, and a former girlfriend, now an ex-FBI agent, who suspects Tree knows more than he is admitting. Suddenly, all sorts of people are trying to manipulate Tree Callister. Everyone thinks he’s in way over his head. But  maybe, just maybe, he’s going to surprise everyone—even himself. Ron Base’s new novel, The Sanibel Sunset Detective, is full of fast-paced action, humor, unexpected plot twists, and memorable characters.  Steeped in the sun-drenched atmosphere of Sanibel and Captiva, two of Florida’s most beautiful and unusual islands, this is the first in a series of Tree Callister adventures.

18 comments on “Books By Ron Base”