You may not have known David Haslam, but if you went to the movies in Canada in the 1980s and 1990s, you certainly knew Marquee, the movie magazine he created and published for twenty-eight years. 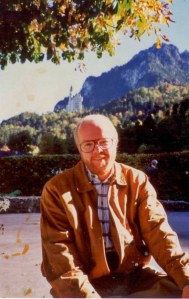 He didn’t quite pioneer the idea of an in-theatre magazine (Garth Drabinsky did that), but David made it a reality from 1976 to 2004. In his heyday, he was the sort of seat-of-the-pants, to-hell-with-the-risk entrepreneur who was and is almost unknown in this country. But then you could never accuse David of being like anyone else.

He would hop on a plane to Los Angeles, walk into a major studio, introduce himself, and the next thing he would talk himself into the art department, picking original photographs for his magazine. I never encountered another publisher like him.

I met David when he decided to do a radio show. The only thing he knew about me was that I was the Toronto Star movie critic. I had never done radio. That didn’t matter to David. Before I knew it, we were at CHFI in Toronto doing Marquee at the Movies, a syndicated radio show that aired on stations across Canada for the next ten years.

One day at the end of the eighties I mentioned to him that with all the movie star interviews I’d done over the past decade and all the great movie photo art he had collected, we should think about doing a book. The next thing I knew we were at the Frankfurt Book Fair selling a lavishly illustrated coffee table book titled The Movies of the Eighties. 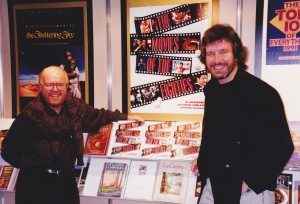 We went to London to promote the book. We were strolling past Harrods when David stopped and suggested we go in and sign books. I thought he was crazy. They had no idea who were were. They would certainly throw us out of the store. David wasn’t listening. Into  Harrods he strode, me following meekly. David introduced himself to the manager. Three quarters of an hour later, we were signing copies of our book for delighted store clerks.

That was David for you in those days: brash, arrogant, bristling with self-confidence, willing to put his money where his mouth was. I could never decide whether I was in awe or ready to kill him. A little of both, I suppose.

David was born in New Brunswick, where he might have acquired his stubborn streak. He grew up in Toronto, not sure what to do with himself. He attended the Ontario College of Art before ending up at McMaster University. He wasn’t much interested in academics, but the entrepreneur in him soon surfaced.

He got hold of a 16 mm projector and persuaded the studios to allow him to show prints of their films. In those pre-DVD days, the only place outside a theatre you could see movies was on television. So when David set up movie showings on Toronto-area campuses, entertainment-starved students flocked. David made a small fortune before he was out of school.

That led to jobs at the Paramount and Universal offices in Toronto. At one point he was assigned to mind the visiting Hollywood celebrities no one else could be bothered with. One of those celebrities was a Hollywood producer named Martin Rackin. Rackin had started out as a screenwriter, but he rose through the Hollywood ranks and at one time had headed production at Paramount Studios.

By the time a youthful David Haslam met him, Rackin was an independent producer who wanted to visit university campuses. David got the job of accompanying him. Rackin was a loud, blustery, profane son of a bitch. Naturally, he and David got along like a house on fire and remained friends until Rackin’s death in 1976. David never tired of telling Marty Rackin stories.

At the height of its success, Marquee had a circulation of seven hundred thousand, an astronomical number for a Canadian magazine. David lived large in those days. He loved sweaters and women. If he saw a sweater he liked, he bought it. If he met a woman he liked, he lavished her with expensive gifts.

He had a house in Toronto and a farm in Mansfield, north of the city, where he kept horses and hosted lavish weekend dinners cooked by David himself..

When I got involved with him, David had just met Alexandra Lenhoff, who not only worked for him but became his partner for the next thirty years. After he met Lexie, David continued to buy sweaters, but platoons of women in the Yorkville area were robbed of expensive gifts.

For all his success, David was a better entrepreneur than he was a businessman. The spreadsheet and the bottom line made his eyes glaze over. He would rather talk about expanding the Marquee brand into promotion and licensing or even movie production. The promotions and licensing worked for a time, but he never got to the movie part of it before Marquee finally limped offstage in 2004.

David was never the same after that. He had poured his life into the magazine and when it went down, so did David. He lost everything, including his beloved Mansfield farm. Worst of all, he lost interest in life. The flamboyant character, so full of confidence, faded, and Saturday morning David made his exit at the Trillium Health Centre in Mississauga at the age of sixty-seven.

I have heard David’s stories a million times over the years in bars and restaurants from Toronto and Los Angeles to London and Paris, from Cannes and Frankfurt to Salzburg and Milton, Ontario. But of all his stories, here is my favorite:

David’s parents were not exactly movie fans, but nonetheless he flew them out to Los Angeles to show them around Hollywood. As a special treat, he arranged to have Clint Eastwood, the biggest star in the world at the time, meet his mom and dad on the Warner Bros. lot.

Eastwood came out of his office, warmly greeted David’s parents, and the four of them stood around talking for a while. Finally, David’s mother looked at Eastwood and said, “Tell me, Mr. Eastwood. What do you do around here?”

For all I know, David is in a bar somewhere telling that story to Marty Rackin.