Home › Uncategorized › With Brooke Shields’ Mother, Dancing On A Stove In Spanish Harlem

With Brooke Shields’ Mother, Dancing On A Stove In Spanish Harlem

And then–I’m not quite sure how–Brooke Shields’ mother was in the kitchen of the restaurant in Spanish Harlem, dancing on the stove.

The music was playing loudly, the cooks and kitchen  help were staring in amazement, as was I. Brooke Shields looked grim. Teri Shields was having the time of her life.

I thought of that night when I learned that Teri Shields had died at the age of seventy-nine. I suppose I wasn’t surprised, either at the news of her death or by the reports that Brooke and her mother were barely speaking.

How I came to be in Spanish Harlem with Brooke Shields, who at the time was the most notorious twelve-year-old in America, and her wild and crazy mother, well, there’s a story.

Brooke had just starred in Pretty Baby, a movie directed by the French filmmaker Louis Malle about child prostitution in the Storybook section of New Orleans in the early years of the twentieth century.

The film is all but forgotten now, but at the time it was hugely controversial, since it featured underage Brooke in the nude. For a time it was banned in Canada.

When I arrived in New York to interview her, Brooke Shields was the controversial flavor of the moment. She would inspire dozens of magazine covers and a whole Brooke look–Time magazine in its cover story about her called it “The 80s Look.” Everyone was clamoring to talk to her and Teri, a single mother who was acting as her daughter’s manager.

I met Teri on the set of the movie Brooke was currently shooting, King of the Gypsies,  a drama about  the secret world of the gypsies that had ambitions to become to gypsies what the Godfather was for gangsters. Brooke was co-starring with Susan Sarandon (who had also appeared in Pretty Baby) and Sterling Hayden, as well as another young newcomer, Eric Roberts (Julia’s older brother). 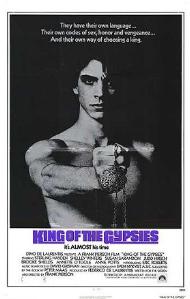 But all eyes were on Brooke.

Teri led me back to where Brooke was being made up. She was in full gypsy regalia. No doubt about it, she was a beautiful girl, and surprisingly self-possessed and well-spoken for someone so young and new to the game. She was quiet and serious and not particularly forthcoming, although when it comes to interviewing twelve-year-olds there is not, beyond a certain point, a whole lot to talk about.

Teri, however, was another matter entirely. She had once entertained ambitions to become an actress herself. Now that her daughter was famous, one got the impression that since she was only twelve and could not really enjoy celebrity herself, Teri would do it for her.

Brooke finished shooting for the day and Teri decided that we should all go out to dinner. Brooke wanted to go home. Teri wouldn’t listen. We would eat something in a favored restaurant nearby.

We took the elevator down. It came to a stop and a man  got on. Teri sashayed up to the startled new arrival. She batted her eyelashes at him and said, “How do you like me so far?”

We walked along a Spanish Harlem street to the restaurant, Brooke complaining she wanted to go home. I felt like an interloper in this ongoing mother-daughter drama, but I dutifully went along anyway.

Teri blew into the restaurant, and more or less took over the place, ordering drinks–copious drinks, it turned out–and food. She talked to everyone, aglow with her daughter’s moment of celebrity. If anyone should have been famous, it was Teri Shields. Brooke slumped forlornly against the wall, hardly saying anything.

Hours later, the meal finished, more wine was being poured. Brooke once again was demanding to go home. But now there was music and Teri was up and dancing around the restaurant.

Then she disappeared into kitchen. Brooke and I traded glances. I got up and went back to see what had happened to her mother. I stepped into the kitchen and there she was dancing on the stove.

I stood there, my jaw dropping, watching Teri sway to the music. Then Brooke appeared, saw what was happening, and ordered her mother off the stove. Teri looked wounded. What am I doing that’s so wrong? she seemed to be saying. I’m just having fun. What’s wrong with that?

It wasn’t hard to see that a weird transformation seemed to have occurred in the relationship between Brooke and her mother. The parent was the wild, immature child; the child had been forced into the role of the mature, responsible parent.

Brooke again ordered mother down from the stove. It was late, she said in a calm voice. She had to be at school the next morning. Teri finally acquiesced, and I helped her down to the floor. The air had gone out of the evening. The bill was paid, a cab was called, and we headed uptown away from Harlem.

They dropped me off at my hotel, and then Brooke and Teri went off into the night.

A few years later, Brooke was starring in a romantic tear-jerker titled Endless Love, the movie that was supposed to launch her adult film career. I happened to be in New York at the time, and ended up at the movie’s premiere party. There was a much taller Brooke, even more beautiful, but still quiet and removed from everything.

The friend who brought me to the party introduced us, and suggested we dance. To my amazement, Brooke agreed. On the dance floor I don’t remember us saying a single word to each other. If she recognized me, she gave no sign of it, and I decided not to say anything.

Later in the evening, I ended up standing beside Teri. She was much more subdued. I introduced myself and said we had met before, and had gone to dinner together in Spanish Harlem.

She looked at me blankly. “I have no idea what you’re talking about,” she said.

Endless Love failed at the box office and did not launch Brooke’s career as an adult movie star. But she has soldiered on in the business and managed to carve out a certain celebrity niche. Perhaps the best thing, she appears to have remained sane and grounded in the face of it all, much the same as she was the night the three of us went out together. 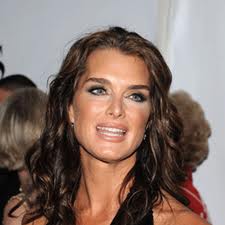 She has two children of her own now. There have been no reports of her dancing on stoves in Spanish Harlem.

One comment on “With Brooke Shields’ Mother, Dancing On A Stove In Spanish Harlem”