The first time I met Richard Burton I got into a fight with him.

I was wandering through the vast upper floor rooms inside a Rosedale mansion at a Saturday night party when I encountered him holding court, seated with his wife at the time, Susan Hunt. He had announced to the press that he wasn’t drinking, but on this late night he was drunk.

I joined the group, listening in. Burton babbled on about something that to my youthful ears made no sense. I said something to the contrary. Dead eyes filling with malevolence inspected me. He snarled. I snarled back. The room went dead quiet.

Abruptly, Susie Hunt announced, “Okay, that’s enough,” and rose to her feet, hauling Burton out of there. The next day the hostess called me, furious I had driven away her star guest. I was suitably shamed and embarrassed–not to mention angry with myself.

Burton had held a lifelong fascination, ever since he had come to scandalous prominence co-starring in Cleopatra with Elizabeth Taylor. The stories of their romance while shooting what became the most expensive movie in film history (over three hundred million in today’s dollars) had mesmerized me as a teenager. I could not get enough of Liz and Dick, as they came to be known in a million tabloid headlines.

Now here I was, finally meeting him, and I get into a senseless argument. What an idiot, I thought to myself.

All this came roaring back recently as I, much older and perhaps a little wiser,  watched in a kind of dream state a newly-minted print of the four-hour version of Cleopatra. It has just been released on Blu-ray to celebrate the fiftieth anniversary of the movie’s June 12, 1963 premiere. 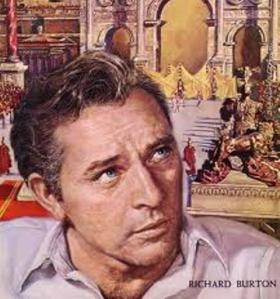 Viewing Cleopatra in this computer image-generated age where sets and backgrounds can be digitally produced and where ten extras can be transformed into an army of ten thousand, reminds one of the lengths to which Hollywood used to go in order to dazzle the eye–and Cleopatra’s lavishness certainly dazzles.

In stunningly sharp Blu-ray, the movie is a revelation: those really are vast armies, the barges are truly on the Nile, and ancient Rome, if not built in a day, was certainly painstakingly reconstructed on a bigger, grander scale on the back lot at Cinecitta.

Stripped five decades later of all the hype and controversy surrounding its production, the movie, directed with such tenacity by Joseph L. Mankiewicz, reveals an intelligence and wit most epics of the time sorely lacked–intelligence and wit drawn unabashedly from Shaw and Shakespeare, but present nonetheless.

The first section, focusing on Rex Harrison as Caesar, remains the most impressive. Harrison is magnificent, and Elizabeth Taylor is surprisingly persuasive as the ambitious, seductive queen of the Nile. Dressed to kill, she breathes a sexuality you just don’t see in movies any longer. No wonder I was so intoxicated by her beauty as a kid.

The second part, featuring Burton’s Marc Antony, remains the most problematic. The length of the film becomes an impediment, and off-screen romance or no, Antony, as written by Mankiewicz, is a ruin and no match for his lover. It has been pointed out any number of times over the years that what was true on film was reflected in real life–Richard could never quite keep up with Elizabeth.

Still, they certainly led the world on a merry chase, as Furious Love, the best and most definitive book about the Burton-Taylor romance, makes clear. They were self-obsessed nomads in love, moving from five-star hotel to five-star hotel across the world, accompanied by servants, children, pets, and tons of luggage, making movies wherever they happened to land. They were the richest and most bizarre movie stars, restless spendthrifts seemingly incapable of settling down.

By the time I caught up with Elizabeth Taylor, Burton was years behind her–as was the fabled Taylor sexuality. The beauty remained on view, but you had to search it out in the center of a face grown round and plump.

She was married at the time to Senator John Warner, and professed to being blissfully happy, retired from movies, and playing the Washington housewife. None of it was true, of course. Taylor soon grew tired of the housewife, divorced the senator, and fled Washington.

When I stumbled upon him at that Rosedale party, Burton had married Susan Hunt, the former wife of the race car driver, James Hunt. She was said to keep a sharp eye on his drinking, although not very successfully the night I got into the fight with him. 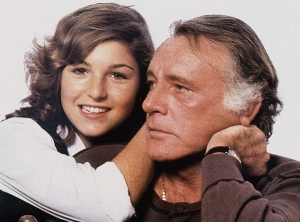 After that mess, I never expected to hear from Burton. But a couple of weeks later, out of the blue, I received a phone call from the publicist on the movie he was shooting in Toronto, a romantic drama titled Circle of Two, directed by Jules Dassin. Burton played an aging painter in love with a much younger Tatum O’Neal.

Burton would see me the next afternoon. I have no idea if he remembered our Rosedale tangle. If he did, he gave no indication of it when we were introduced on the Circle of Two location. He slipped quietly onto the set, swathed in an air of melancholy. It was not hard to imagine why, ever since Cleopatra, he had been mostly cast in the role of the sadly ruined man, the archetype of Graham Greene’s burnt-out case.

Yet after we retreated to his trailer, he was affable  and seemed in good spirits as he prepared coffee, his hands shaking a bit fighting to get the lid off a tin, recalling  the crazy days when he was the co-star of the Liz and Dick travelling road show and could not go anywhere without attracting a crowd.

“I still don’t understand it,” he said. “It still happens every so often when from nowhere they suddenly appear. I long ago gave up arguing. I just smile and smile and sign the autograph.”

But not everyone knew him. He told a story about Elizabeth Taylor trying to find him while they were shooting The Comedians in West Africa. He said she phoned around to all the bars in town. When she got to the last one, she inquired of the bartender if Richard Burton was there. Who? The bartender said. Richard Burton, Taylor answered. He’s one of the most famous actors in the world. There was a pause before the bartender said, “noir ou blanc” –black or white?

Given the millions he made and the intensity of the public obsession surrounding him and Taylor,  he nonetheless still managed to come across as something of a Welsh Everyman–albeit one with a magnificent, classically trained voice–bemused at finding himself the object of so much attention.

He exhibited–or appeared to exhibit–an unexpectedly carefree attitude toward fame and fortune, flying in the face of the more popularly held view that, along with the booze, these were the things that destroyed him. When I suggested he should write his autobiography, he shrugged off the idea. “I think I’ll leave that until I’m about seventy.” He paused. “If I make seventy, of course.”

We both chuckled, but in the end he didn’t even get close, dying of a heart attack at his home in Switzerland a few years later at the age of only fifty-eight. Taylor died two years ago, age seventy-nine.

After all this time we continue to be fascinated by them. Burton’s diaries were published last year (when Burton would have been eighty-seven, thus proving accurate his assertion he would wait until at least seventy before producing a memoir). An awful TV movie (with Lindsay Lohan, of all people, as Taylor) was broadcast recently. That hasn’t stopped talk of as many as five feature films based on the couple, including, BBC’s Burton and Taylor (with Helena Bonham Carter and Dominic West), and an adaptation of Furious Love directed by Martin Scorsese.

And, of course, there is Cleopatra, restored to glowing life at fifty.

“Everybody was insane,” Burton recalled of the time making the movie. “The whole world was bonkers.”

He laughed and shook his head and I laughed too, having a great time that afternoon with Richard Burton.

I agreed with everything he said. Probably why we didn’t get into a fight.

One comment on “Fighting With Richard Burton; Dreaming of Cleopatra”