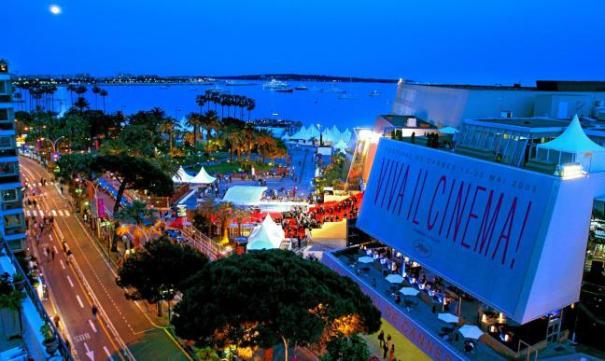 Every year about this time I think of Cannes, El Sid, and six green beans.

El Sid was my nick-name for Sid Adilman, the legendary Toronto Star entertainment reporter. For years in May, El Sid and I would head for the Cannes International Film Festival, the longest-running, biggest, and most glamorous of movie gatherings. 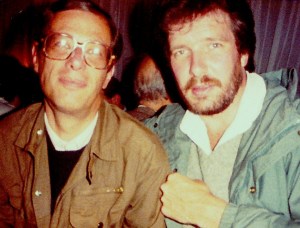 Cannes had something no other festival will ever be able to match: the Mediterranean and the French Riviera. When I was growing up, the Côte d’Azur bespoke the ultimate in sophistication, personified, to my mind, by Cary Grant and Grace Kelly in Alfred Hitchcock’s classic To Catch A Thief. Once I saw Cary and Grace against that breath-taking backdrop, I had to get there, somehow.

To my surprise, when I finally did arrive, the reality of Cannes more or less lived up to my childhood fantasy.

In 1981 the festival was still a somewhat intimate affair, although I’m not sure I realized it at the time. You could become stranded at Charles De Gaulle airport in Paris with Norman Mailer. Jerry Lewis would stroll past you on the Croisette and nod good morning.

At a reception a tall stranger would walk over and it would take a moment to realize with a start you were chatting to Gore Vidal, a friend of Paul Newman and Joanne Woodward who would arrive a few moments later.

The main festival was still housed in the Palais next door to the Hotel Carlton, tiny compared to the monstrosity being constructed further along the Croisette overlooking the Bay of Cannes.

The life of the festival was more or less defined between the Hotel Carlton to the east and the Hotel Majestic to the west.

The terrace at the Carlton constituted the festival epicenter in those days. Anyone who was anyone sat there, mingling with lots of people who were nobodies, but then the terrace was a fairly democratic place. If you were there, you might be somebody. And if you weren’t, well, who was to know?

Sid and I always stayed at the Hotel du Century up the street from the Carlton on the rue d’Antibes. Not a luxury hotel by any stretch, but the rooms were good-sized and fairly reasonably priced–if there was such a thing as reasonable in Cannes during the festival.

This was our headquarters each year. This is where we drove each other crazy.

It was often said that El Sid and I were an odd couple. He was a small, slim, intense man, always impeccably dressed, always on the hunt for a double espresso, forever staring into patisserie windows at sweets he would never eat.

Everyone in show business read Sid’s daily Eye On Entertainment column in the Toronto Star. He was Canada’s premier show business reporter (the fact that he was also the Canadian editor of Variety, the Hollywood trade publication, only added to his influence).

No one took their beat more seriously than El Sid. He lived and breathed entertainment. I had been reading him since high school in the days when he was at the old Toronto Telegram. When we first met, I was somewhat in awe–and secretly thrilled to be sharing reporting duties at the festival.

At least I was the first year. After that, I decided that life on the Mediterranean was too short to spend sitting in a movie theatre.

The great Dusty Cohl, one of the founders of what is now the Toronto International Film Festival (TIFF), daily held court on the Carlton terrace  wearing his trademark black cowboy hat.How could you resist him? The  soupe de poisson in the Old Town was delicious, the Kir Royales late at night at the Majestic, irresistible.

The fun of Cannes was not, alas, in the movie theatres. It was at the Hotel du Cap at Eden Roc in Antibes, not far from Cannes. The really rich and the very famous were housed in the one hundred rooms of this converted mansion (built by a Russian prince).

Here, one could inhale the sweet fragrance of the hotel’s roses while lounging near the pool with the actress Mary Steenburgen and her then-husband Malcolm McDowell, sweating from an afternoon tennis match.

The fun was at Le Petit Carlton on the rue d’Antibes, the anthesis of the Carlton terrace, where the press and the indie filmmakers hung out, and where you could end up drinking (fairly cheap) beer with Terry Jones of Monty Python or rubbing shoulders at the bar with director Jim Jarmusch.

It was dining at the Moulin des Mougins, the first Michelin three star restaurant I ever visited, where the diner sitting next to you could turn out to be the great actor James Mason. And it was dancing late at night to a live Chet Baker concert in a ballroom at the Hotel Majestic.

The movies at Cannes could always be screened back in Toronto, but the experience of Cannes, I decided, would never be repeated, and so I had better enjoy it. This attitude infuriated Sid. He was there to work. If I missed the screening of Merry Christmas Mr. Lawrence–which I did–he became apoplectic.

Each year, without fail, he stopped talking to me. I would line up for a screening (yes, I did go to them on occasion), and there would be El Sid standing not ten feet away. Ignoring me.

But Sid was nothing if not basically good-hearted, and no matter how angry he got with me, he always came around in the end, and, as unlikely as we were together, we remained friends. But he was a character. Of all the stories I can tell about Sid, this is my favorite:

On the Air Canada flight bound for Paris, I settled back in my seat, relieved to finally be off to the festival, looking forward to ten days on the Côte d’Azur. I ordered a nice glass of Merlot from the flight attendant. Dinner arrived (in those days Air Canada still served a pretty decent meal on its transcontinental flights). I glanced over at Sid, who was sitting next to me. He wasn’t eating anything.

Eventually, he produced a tin foil-wrapped package and placed it on his lowered chair back table. He then proceeded to unwrap the tin foil.There, laid out in a neat row, were six green beans.

“My dinner,” he announced testily when I asked him about the beans.

Sid proceeded to eat four of the beans, picking up one at a time, placing it in his mouth, chewing it thoroughly, before attacking the next one.

With two green beans left, he abruptly stopped eating, carefully refolded the foil, and put it away. I looked at him. “What was wrong with those two?” I asked.

“I’m saving them for later,” he snapped. 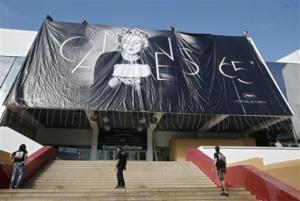 Since those days, I’ve been back to the South of France many times and even returned to Cannes on a few occasions. The original Palais has long since closed and the new, much more grand version across from the Majestic has shifted the festival focus away from the Carlton.

The Hotel du Century where Sid and I stayed was closed for years, serving as a drab, deserted repository for my fading Cannes memories. Now it has been renovated into a fashionable boutique hotel and made unrecognizable.

The Carlton also has undergone a facelift 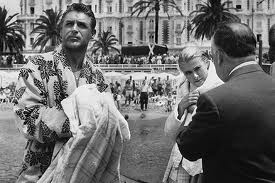 that has robbed it of its former Old World charm or any sense that Grace Kelly and Cary Grant might stroll through the lobby. Le Petit Carlton closed in 2008, and the space it occupied is now just another one of the many high-end boutiques lining rue d’Antibes.

The Moulin des Mougins famously lost one of its stars and much of its luster. The Hotel du Cap still attracts the very famous who these days must be really, really rich to stay there (and you still pay in cash).

And the  festival endures of course, but one has the impression, viewing it from afar, that it is much bigger, more regimented, and certainly less intimate than it was when I was there. But maybe that’s just me.

El Sid, wonderful, exasperating Sid, died too soon in 2006 at the age of sixty-eight. But each year as the film festival gets under way, I sit and remember those wild, silly years when we traveled together, and fought together, and, on more than a few occasions, laughed together.